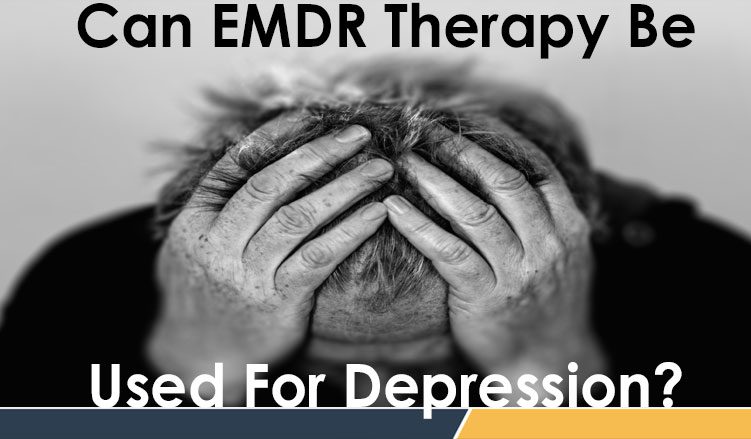 Can EMDR Therapy Be Used for Depression?

For many people, conventional treatments and medications don’t always work. This is because they don’t always get to the root of the problem, especially when depression has been caused by traumatic experiences. If you’ve tried other therapies without success, you may want to look into a type of cognitive behavior therapy known as EMDR.

Although it’s a relatively new type of treatment, it’s been helping people with their depression and is quickly gaining support from many medical experts. So, if you’ve exhausted all options in your efforts to find relief from depression, here’s what you need to know about EMDR and the types of depression it might help with.

What is EMDR Therapy

Eye Movement Desensitization and Reprocessing (EMDR) is a type of therapy aimed at helping patients to overcome memories of past traumatic experiences that may still be causing distress. These negative memories may not have been processed properly by the brain, and EMDR is a way of reprocessing these memories more efficiently. You can then experience relief and move on without recurring symptoms.

How Does EMDR Work?

The process of EMDR involves focusing on two different asks simultaneously: the recalling of a traumatic experience while making different eye movements. The point of this is to rewire your brain’s working memory process so that a stressful event is less vivid in your brain, and therefore, less traumatic and memorable.

Treatment sessions normally last about 50 minutes in duration (though this may vary), and there is no set limit on how many sessions you might need over time.

For our more detailed explanation of EMDR Therapy click here

What Types of Depression Can EMDR Treat?

Because EMDR is considered to be a type of trauma-focused cognitive behavioral therapy, it may be more beneficial for people who have depression as a result of a traumatic experience. Depression caused by things such as nutritional deficiencies, hormone imbalances, or other non-traumatic factors may not react to EMDR treatment.

If you suffer from any of the following types of depression, you may benefit from this type of therapy:

For those with PTSD, EMDR has not only shown that it’s an effective and worthwhile treatment, but that its benefits are often longer-lasting than other types of therapy is.

In a review of studies on PTSD where over 1,400 patients were treated with different types of therapies, evidence showed that improvements from EMDR lasted longer over periods of one to four months than other forms of therapy.

In children with PTSD, there’s evidence that EMDR is much more effective in treating the depression related to this disorder than other, more conventional treatments. The benefits seen in these children have been noticed even 9 weeks after treatment.

Bipolar disorder is a syndrome that involves changes in mood and energy levels. Depression is a common symptom in those with this disorder, although it’s not always caused by the same things. EMDR is a promising type of intervention that might just help some people with bipolar disorder.

But bipolar disorder doesn’t just affect the way people feel. MRI brain scans show that the brain in bipolar patients often responds differently during periods of rest than in normal patients. Within your brain, there’s a network known as the default mode network (DMN).

When a person isn’t focusing on something around them, such as a task or activity, this network is most active. It activates when a person is thinking about something based on memory or introspective thought, such as an event from the past or someone else who isn’t currently present. Think of this as your “inside” thoughts.

In bipolar disorder, the DMN doesn’t always deactivate when it should, which is one reason why depression and other symptoms are often present in those with this disorder. This lack of deactivation can actually be seen in MRI brain scans.

Not only have bipolar patients seen improvements in their depression with EMDR treatment, but brain scans have shown that DMN activation has almost completely normalized in some after just 12 weeks of therapy.

Post-stroke depression (PSD) is a form of depression that sometimes occurs after a person has had a stroke. In some cases, those who experience PSD may also have aphasia as a symptom, which is an inability to either talk or write.

EMDR therapy has been shown in studies to be effective in treating both depression and aphasia in those with PSD. In some cases, therapy was started many years after strokes had occurred and still effectively treated these two chief symptoms, with lasting effects four months after EMDR therapy was stopped.

Abusing drugs or alcohol is a well-known cause of depression in many people. Because of this, doctors have long been interested in finding a form of therapy that might be universally beneficial for those with substance abuse problems. EMDR may hold promise as the therapy they’ve long been searching for because in four different studies it was found to be an effective treatment for substance abuse-related depression. Not only did it help patients resolve their depression, but it also led to improvements in emotional balance and self-esteem.

It may also be useful as a complementary form of treatment for these types of patients who are already undergoing other forms of treatment. In a study where groups of substance abuse patients were either given conventional treatment or EMDR combined with conventional treatment, the group that received the combined therapy showed much more significant improvements in depressive symptoms.

How Long Do the Benefits of EMDR Last?

EMDR is not intended to be a temporary fix for someone’s depression. It’s meant to resolve the initial cause of depression, so benefits are expected to be long-lasting for most people. Some people’s experiences might vary simply because there are different causes of depression and different levels of trauma involved.

In one study that involved EMDR as a treatment for long-term depression, 88% of patients who underwent therapy experienced significant improvement after 20 sessions. There was a follow-up with patients 3 months after the therapy sessions ended, and all had maintained their improvements.

Another study found that EMDR treatment resulted in the complete remission of symptoms in 68% of patients with long-term depression, and this effect was still present a year later.

Is EMDR Right For You?

Whether EMDR will help you with your depression or not greatly depends on what type of depression you have and what caused it in the first place. One major upside to trying this therapy over others is that there are little to no side effects for most people. So, if you think that EMDR might help relieve your depressive symptoms, it’s a relatively safe treatment that just might be worth your while.

What is EMDR Therapy

In recent years, EMDR Therapy has been gaining recognition among both patients and doctors. It addresses both the emotional and mental aspects of anxiety in a natural therapeutic way.

Can EMDR Therapy Help With Anxiety

In recent years, EMDR Therapy has been gaining recognition among both patients and doctors. It addresses both the emotional and mental aspects of anxiety in a natural therapeutic way.

Depression or Funk. What’s the difference?

Most people think of depression as being sad all the time, but there’s a lot more to it than that. Here’s how to tell whether you’re depressed or in a funk. Healthyway.com interviews Dr. Amy Serin to help readers determine if they are experiencing depression or are just simply in a funk.

Neurofeedback and Depression – Can It Help?

Someone may seek neurofeedback treatment to help with one or more depressive symptoms such as low mood, loss of interest or pleasure in most activities, sleep disturbance, loss of energy or fatigue, poor concentration, feelings of worthlessness, or suicidal ideation.