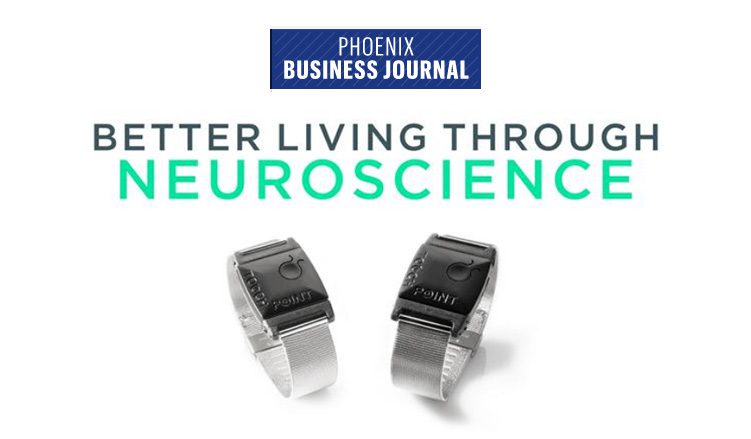 A stress-reducing wearable device developed in Scottsdale launched Tuesday with a $15,000 Kickstarter campaign.

Buzzies are non-invasive, wearable devices that claim to alleviate stress and improve performance by overriding the “fight or flight” mechanism in your brain.

The two entrepreneurs started Scottsdale-based TouchPoint Solutions LLC in January to find a way to make the technology affordable and accessible to the masses, said Mayo, the co-founder and CEO. Serin, who has a PhD in clinical psychology with a specialty in neuropsychology, is the company’s co-founder and chief science officer.

“Anytime we feel overwhelmed, our instincts kick in and you feel stress,” said Mayo, the former chief transformation officer for the Arizona Department of Economic Security who was appointed by Gov. Doug Ducey. “This overrides that and you feel calmer. The stress goes away as quickly as 30 seconds.”

The two Buzzies coin-shaped devices, which can be worn like a watch or detached and discreetly put in a pocket, can be turned on using an iOS or Android app to give a vibrating stimulation.
The two women trademarked and patented the technology embedded in the Buzzies, called BLAST (bi-lateral alternating stimulation-delivered tactile).

Users can turn on the devices right before a stressful situation, like a presentation or meeting with your boss, or used throughout the day to improve focus. The devices are also deemed safe enough for children, who can use the devices in their socks to deal with anxiety.
“My 5-year-old daughter has night terrors and this helps her sleep,” said Mayo, who was also former vice president of Valor Global Services, a Scottsdale tech company. “After using the Buzzy you can’t get as upset because your fight or flight mechanism isn’t working.”
Buzzies are typically used for a couple of minutes to 15 minutes a day.
“This technology is so disruptive,” she said. “Everyone suffers from stress. Eighty to 90 percent of disease is caused by stress. We want to be able to offer you release in as little as 30 seconds.”
TouchPoint Solutions made it a point to use local or U.S. companies to make the devices. The electronics, programming, assembly and boxing is done at Quik Tek Assembly in Tempe. The plastics are made in Minnesota, and the app development was done in Seattle.

The Buzzies retail for $259 per order, which comes with two devices, two watch bands, a wall charger, a charging cable and a velvet carry bag.

The Kickstarter campaign was a way to test the market before the products went live, Mayo said. The company has been taking pre-orders on the devices since October through the company website.
TouchPoint Solutions had already raised more than $8,000 of its $15,000 goal by Tuesday evening. The campaign ends Dec. 20.
Kickstarter supporters are guaranteed to get their Buzzies before Christmas, Mayo added.

“We’re thrilled with how the campaign has been going so far,” she said. “It will be great to work with the backers and get their feedback.”

The self-funded company with two employees was started by both as a way to give back, not to make money, Mayo said.

“We follow the Toms model. For every two devices we sell, we give away one to whoever is in need, children or adults,” she said. “We’re really just committed to women entrepreneurs and we wanted to give voice to this women’s movement and keep our philosophy front and center.”