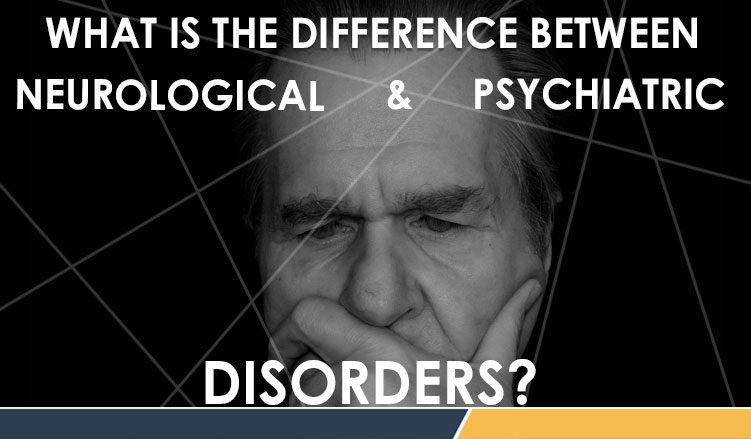 What Is the Difference Between Neurological and Psychiatric Disorders?

In recent years, there have been calls within the medical profession to erase the distinctions between neurological and psychiatric disorders. As scientists, most medical professionals do realize that before a step like this can be put into place, there needs to be conclusive evidence that both types of disorders are similar enough to categorize in the same way. Is there evidence?

Before any conclusion can be formulated, it’s important to determine what is the difference between these two types of disorders.

The following information should help do that.

What Are Neurological Disorders

Neurological disorders occur because of malfunctions or damage to the nervous system. That would include the brain, spinal cord, and nerves.

The list of most notable neurological disorders would include epilepsy, multiple sclerosis, Huntington’s disease, Parkinson’s disease, and Alzheimer’s disease.

Treatment for these types of disorders falls under the purview of a neurologist. Typically, an MRI or brain scam would be used to detect and diagnose the existence of one of these conditions in the brain. If a patient gets such a diagnosis, the treatment options would include surgical procedures, physical therapy, mental therapy, and medication.

What Are Psychiatric Disorders

Psychiatric disorders are typically associated with disturbed behavior and a patient’s emotional state. Treatment for these types of disorders falls under the purview of a psychiatrist, psychologist, or licensed therapist.

These types of disorders occur for a variety of reasons. The list of potential causes of psychiatric disorders includes:

Treatment for these conditions includes therapy, medication, or a combination of the two.

After looking at the difference between these two types of disorders, it becomes clear there is somewhat of a common thread. What researchers have found is that some psychiatric disorders might occur after being initiated by a neurological disorder.

This is backed by a study published in 2015, led by Nicolas Crossley of the Kings College in London, looking at the “Neuroimaging distinction between neurological and psychiatric disorders(1)“, found that:

Here is what she said in a quote about how a physician might have to proceed when trying to make a proper diagnosis:

“In the absence of these findings, a primary care provider might be faced with a difficult decision point when considering a referral to a psychiatrist versus neurologist,” Shapiro then added. “Common and vague symptoms such as fatigue, mood alterations, or memory changes will require additional history-taking and physical examination in order to elucidate the most appropriate referral.”

The study mentioned earlier led by Nicolas Crossley might provide enough evidence to support that both types of disorders are different and distinct. Over 168 published brain imaging (MRI) studies, the study found divergent neuroimaging findings in both disorders. That led the researchers to believe that from a neuroimaging perspective, the differences are evident.

Like many studies in this area, there is still some ambiguity associated with the results. In this study, they were unable to control for psychiatric patients who were taking psychotropic drugs. That made it difficult to discern brain structural abnormalities caused by psychosis versus abnormalities caused by long term drug use.

Given potential issues with determining the proper diagnosis, it’s easy to see why a primary care physician would have difficulty determining the right treatment path for patients. For now, it would seem that the difference between these two types of disorders is enough to prompt neurology and psychiatric professionals to work together to find the right treatment for patients.

Photo by Pixabay from Pexels

The 4 Things This Neuropsychologist Wants You to Do Every Day

Our attitude toward health has never been more holistic—it seems like Western culture is finally syncing with its Eastern neighbours, as our approach focuses more and more on prevention rather than cures. It also means that rather than simply looking after our immune systems, we’re now employing a more 360-degree approach to wellness, covering everything from our guts, our hearts and more recently, our brains.

The Difference Between Biofeedback and Neurofeedback

Biofeedback and neurofeedback may often be mistaken for the same intervention, but they involve different forms and processes of treatment.

Depression or Funk. What’s the difference?

Most people think of depression as being sad all the time, but there’s a lot more to it than that. Here’s how to tell whether you’re depressed or in a funk. Healthyway.com interviews Dr. Amy Serin to help readers determine if they are experiencing depression or are just simply in a funk.